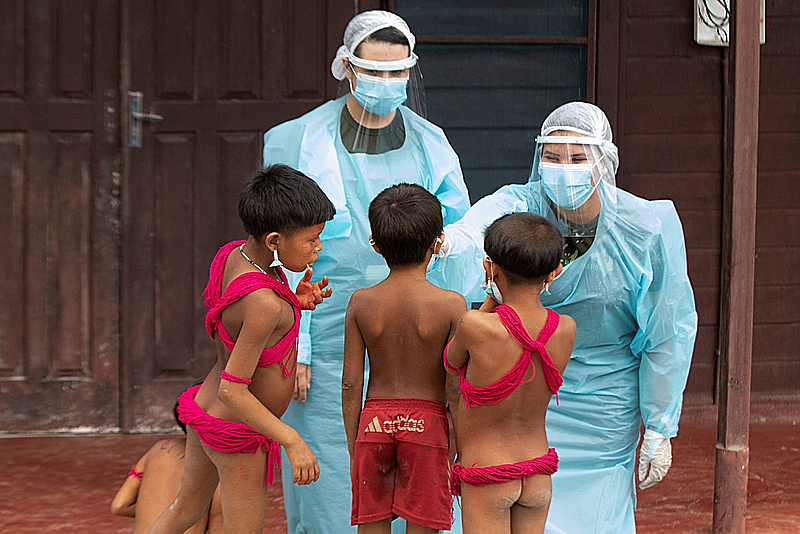 7 Yanomami babies died from covid since the start of the pandemic: worst scenario in 30 years, says anthropologist

“This is a crucial moment for the defense of indigenous peoples, because we have not seen the reality of the Yanomami and Yekweana natives reach such levels of despair like we are seening today 30 years”. The warning was given by anthropologist Ana Maria Machado in an interview with Brasil de Fato interview, she is a member of the Pro-Yanomami and Yekweana Network, and one of the authors of the “Xawara: Traces of covid-19 within the Yanomami indigenous land and the state’s negligence” report, published at the end of last year.

According to her, abandonment and the advancement of illegal mining are the main vectors of diseases such as covid-19 in Yanomami Indigenous lands, the largest native territory in the country, located in the states of Amazonas and Roraima, near Brazil’s border with Venezuela, covering an area of over 9.6 million hectares. Home to some 30,000 indigenous people, it is among the most affected by illegal deforestation in the Brazilian Amazon.

Xawara is the name given by Yanomami ancestors to what we now know as a pandemic. The word is the Yanomami root for the word booshikë, which we know as ore. According to their cultural rules, booshikë must be left alone, inside the earth, otherwise it will cause diseases and deaths, spreading like smoke.

The incessant race for gold, coupled with collusion and negligence by authorities, are precisely what has led to illness and death of Yanomami children and babies, as explained in the 105-page report published by the Socio-Environmental Institue (ISA) and compiled by the Yanomami and Yekweana Leadership Forum, in conjunction with the Pro-Yanomami and Ye’kwana Network, using data collected from March to October 2020.

Read some excerpts from the interview

Brasil de Fato: Ana, what motivated the creation of this report?

The Yanomami and Yekweana Leadership Forum, which is also one of the creators of the report, was formed in 2018, bringing together the seven indigenous associations present on Yanomami land, and today being the main decision-making body inside Yanomami territory.

Then in June, the Forum launched the #ForaGarimpo and #ForaCovid campaign, to raise worldwide awareness about the advancement of covid in Yanomami lands. So, based on an articulation between the Forum and the Network, we created this report, so that we could document the impact of the pandemic among the Yanomami.

While making the report, we dove deeper into the data and the analysis showed that the situation the Yanomami and Yekweana are facing is very critical. This is mainly due to the uncontrolled advance of Covid and malaria, which is also completely out of control, and both being linked to the advancement of mining, which has greatly increased. In addition to all this, a dismantling of public health programs geared towards indigenous people is happening across the country.

Therefore this report also serves as a basis for legal filings, and can be used by human rights commissions and other bodies that defend indigenous peoples.

Illegal mining is a very old problem. Even before the demarcation of the Yanomami Indigenous Land, which took place in 1992, the Yanomami lived through a dramatic period in history. In the latter years of the 1980s, the land where they lived was invaded by more than 40 thousand miners. At that time, things were also completely out of control. Statistics point to more than a thousand Yanomamis dying during that period, due to diseases and violence linked to mining.

After that, with the demarcation of indigenous lands in 92, mining began to decrease considerably and became an illegal activity, carried out peripherally by a few hundred miners. What we see happeing now is a coupling of the high price of gold starting in 2008, with the dismantling of public policies, especially after Bolsonaro took office, increasing illegal mining to absurd proportions.

Today it is estimated that there are more than 20,000 gold miners illegally on Yanomami land. Despite it being a known illegal activity, it seems that Bolsonaro’s election served as a green light for miners to ignore the law, and enter Yanomami territory in search of gold, without the fear they had before, as they know they can count on the president’s support.

While Brazil and the rest of the world stood still, maintaining only essential activities, the illegal miners, known in Brazil as garimpeiros, did not go into quarantine.

Bolsonaro himself has a garimpeiro past, as his father mined for gold in the Serra Pelada region. During his presidential campaign, he promised to authorize mining on indigenous lands. Thus, making good on his campaign promise, Bolsonaro signed bill 191/2020 that aims to regulate the exploitation of mineral resources, by defining specific conditions for mineral exploitation and mining, for resources such as oil and gas, as well as the extraction of hydroelectric power on indigenous lands.

In 2020, the report already pointed to children as one of the groups most affected by Covid-19 in the region, and now the country is seeing news of the death of ten Yanomami babies in just a month. Could these and other lives have been saved?

Certainly. What we have seen in recent years is a complete dismantling of public health policies aimed at indigenous communities. According to monitoring that we of the Pro-Yanomami and Yekweana Networks do, so far we have registered the deaths of 32 Yanomami, which is a higher number than what is reported by health agencies, which claim that only 12 deaths have occurred.

According to our monitoring, the numbers are astouding, because during the pandemic, seven babies under the age of two died from Covid-19, tested and confirmed. This is a statistic that draws a lot of attention because it differs from the rest of the world, where most victims are the elderly or people with comorbidities. At this point, it is important to note that one of the main comorbidities for Covid-19 among the Yanomami is malaria. And with malaria completely out of control, Covid ends up taking more victims, not to mention several children who were also suffering from malnutrition, thoroughly weakened.

Even with their land officially demarcated, with rights ensured by the Constitution, we have seen deaths due to inaction when it comes to indigenous health.

Thus, certainly, if the federal government had taken effective action, if there had been a plan to at least contain Covid, these children would not have lost their lives and their future because of this virus. It is the responsibility of the federal government to come up with an efficient containment plan, which has not happened.

The central issue being exposed in the report is precisely the absolute lack of medical assistance being given to indigenous peoples in Brazil, whether to prevent Covid-19 or to treat other diseases. Even in recent years, we have seen an increase in efforts at criminalizing NGOs, and the scrapping of various protection agencies, culminating in the pandemic disaster … can we say that this is a crucial moment for the defense of indigenous peoples?

Certainly. This is a crucial moment for the defense of indigenous peoples, because we have not seen such levels of destruction among the Yanomami and Yekweana like we see today. Even with their land demarcated, with rights guaranteed by the Constitution, we have seen silent deaths occur due to the neglect caused and inaction towards indigenous health.

What we see specifically in the case of the Yanomami, is that a massive deterioration of the public health system is happening due to a lack of serious and efficient management, mainly aimed at preventing diseases and providing treatment in the villages themselves, so that patients don’t have to go to the cities.

Furthermore, the presence of health professionals is also very scarce and overburdens the few employees who are able to work on indigenous lands. So this is a way to kill them silently through neglect. In addition to this, there is also the criminalizing of organizations that offer natives support, that have been partners in the indigenous struggle for their rights and for having their voices heard, as well as improving the healthcare provided to these populations.

Thank you for your upload